Keynote: From Crap to App

What is an app?

In a recent seminar with some Danish journalists (starting at about 5:00), I used the metaphor of the app as a cup of coffee, an ambassador of your business whose production encompasses a wide range of possible efforts. I also gave an extended technical definition of the word “app” (at around 14:45) that I found tidy enough to transcribe for you here.

An app is software that transforms its hardware to provide a complete and productized experience.

So let’s go into that.

Software is not about ones and zeros. Software is about configurability. It’s about, you’ve already invested in something, and now you’re just going to find new uses for that thing, an application of that thing, or an “app,” if you will.

That software transforms, right? It transforms it hardware, that physical device.

When you have an iPad, and you’re using the iBooks app, you’re not using an app. You’re reading a book. You’re holding a book.

And if you want to switch over to GarageBand and start playing on the piano, you’ve turned the book into a piano. You have transformed that flat piece of glass.

This is something that people always wonder about, this dichotomy in, for example, Apple’s design. They say, “Why is it? The iPad, the iPhone, such a minimalist piece of art, but the software so colorful, and so rich, and so synthetic.”

And that’s the whole point. The hardware is meant to fade away and let the software take over what that device is to the user.

That’s what we mean when we say, software that transforms the hardware. But it’s not just that you’re transforming hardware. That’s a demo.

An app is a complete and productized experience. It is complete, which is to say, the app does not leave you hanging. The app is what you need to have the experience you’re meant to be having.

And it’s a product. It is something finite and measurable that you can buy, that you can transmit, that can be created by artisans and sold to customers.

Therefore an app is software that transforms its hardware to provide a complete and productized experience. 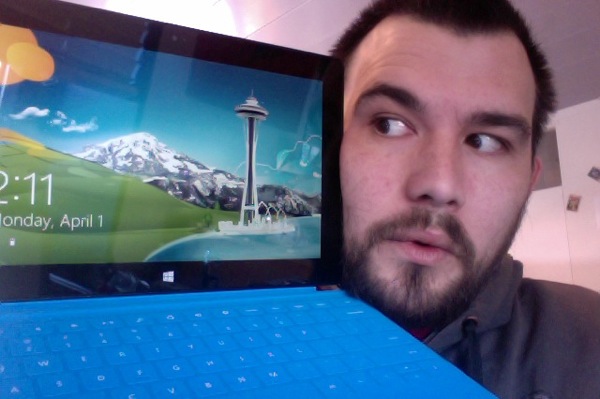 It happened last night. First the battery icon on my iPhone went from green to red, popping up the 20% warning. I was looking right at it when it happened, like a pot of water boiling as I watched it, or a piece of toast popping up just as I look at the toaster. Maybe it was because it had caught my attention, but a kind of anxiety gripped me.

I saw in that icon the human condition, our own batteries running down, and 20% never seemed so small. The red line like the spot of blood after a coughing fit that tells you the inevitable is near. Maybe you’ll get one more warning but certainly you’ll reach that point where the spinner barely has time to register before the whole thing shuts down.

After a while I plugged the phone in and felt a sense of relief. We may run down, but we can recharge. We may be damaged, but we can survive. This phone whose warrantee was voided years ago by a Cambodian toilet, whose glass was smashed to bits and replaced, yet wore the cracks of years of hard work and world travel.

Sitting there, reading for a while more, just a little while more, in the middle of a sentence, the screen went blank. A bit of frantic troubleshooting as we confirmed the charger was working, and tried another charger, many confused minutes of button pushing and holding, and finally, resignation.

The world’s toughest iPhone gave up the ghost, and I can’t afford a replacement right now. For the first time since 2007, when I slept on the sidewalk in front of the Apple Store for the phone I already knew would make my career, I am alone.

I had the honor of being invited back to the stage for another Weekly Wednesday Lunchtime Lecture, and took the opportunity to introduce a bit of lexicon, submitted here for your approval.

Blue tulips are bugs or missing features that are immediately obvious to anyone using a product, but which remain unresolved due to hidden complexity.

Although perfectly applicable to software, the original blue tulips are quite literal. If you find yourself shopping for tulip bulbs, you will notice that they have every color and pattern imaginable—except for blue.

Were you to ever-so-casually mention that a tulip producer might consider making a blue one, you would hear through gritted teeth that it’s not that they never thought of making a blue tulip.

It’s just that generations of the world’s top geneticists have consistently failed to produce one. Orange carrots? So successful people forgot they were ever not orange. Blue tulips? Forget about it.

A blue tulip is a lot like a white whale, except in Moby Dick, Ahab wasn’t further burdened by everyone he met asking if hadn’t considered maybe going back for revenge?

It’s not a limit of effort or of interest, but of nature itself, which is bad enough to exist, but to come up again and again, so cavalierly every time, is a kind of repeated insult, emblematic of how hard making things really is.