Well, it’s official—Lemurs Chemistry: Water is a hit! We’ve got five-star ratings on App Stores worldwide. Everyone agrees it’s beautiful, nobody hates it, and people who understand the game find it quite addictive. The current Game Center Champion is Joris Kluivers, whose game of Dry mode is currently over 14 million points! When I passed 2 million, I said my high score would reign for a long time to come. Boy was I wrong! 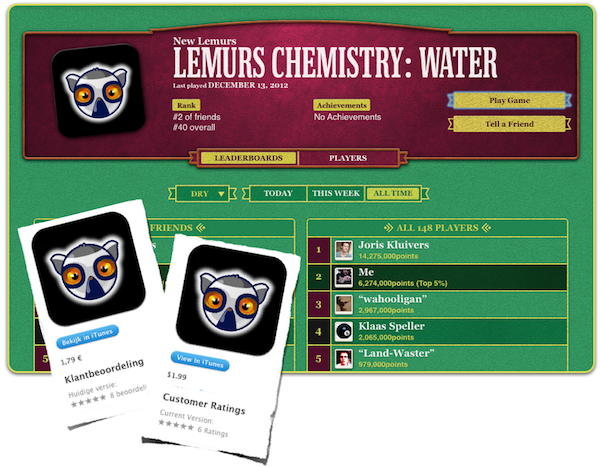 The game has revealed an interesting phenomenon where kids find it quite easy, but adults are frustrated because they think they need to know chemistry. You are meant to discover chemistry. If you could make atoms billions of times bigger, hydrogen molecules would not be the ones labeled H. They would be the smallest, and therefore the lightest and fastest. Oxygen and nitrogen molecules look similar, but only oxygen reacts with hydrogen. Kids get that.

I’ll look back on the decision to launch in December the way military historians look back on generals who invaded Russia in the winter. There’s been a lot of bad stuff in the news lately, and it’s made me shy from my usual flair for hype. Instead, I think of why I’m doing this, not to make a quick fortune with a game, but to make gaming into something that makes future generations smarter, and I realize that it’s going to be a lot of work. Hard times ahead, that we can agree on.

We’ll supplement the game with some tutorial material, like the trailer, and this lemurcule cheat sheet. App Review is going to be closed for awhile, so we don’t get to do an update until early next year. We’ve got some cool tweaks we’re preparing for that, to make the game even better. I have a lot of smart friends with kids who have a lot great ideas about making games educational. There’s going to be a lot of work.

The product was expensive, especially in human terms, and I’d like to make these products smaller and faster, without necessarily making them suck. People really like our business ethos, about not siphoning money through their kids, about a no nonsense respect for their privacy. There’s a lot to learn, which is a good sign.

2013 is going to be an interesting year!