Why people are fat, unhealthy, and sad

Once you accept the facts, you can decide whether you care about making the world a better place, and whether you have what it takes to actually solve this problem. This is what nature calls a niche, and there’s an industry to be built selling food products that are not only better for you, but better in every way than food that is bad for you.

Solve that problem, and you will be the Apple of food. That’s how Apple took over the mobile market. They said it doesn’t matter why cell phones are lousy, it only matters that we make something that is not merely adequate, but a surprise and delight to use. It doesn’t matter what you think of Apple. That’s their big strategy.

It’s really quite simple. Figure out what the default option is, give people a reason to try your option, and make it easy for them to do so. Throw in something to talk about, and you’ve got the perfect product. The people selling things like politics, religion, and speculative investments are great at this. The people selling science, reason, and being good to your fellow man are using Comic Sans.

If you have what it takes, any market is yours, and make no mistake, that goes for every market, and that includes the marketplace of ideas. The reason things are falling apart and it feels like you’re surrounded by idiots is the same reason you’re surrounded by people who are fat, unhealthy and sad—the bad guys pick better fonts.

Science deserves to be treated better than this. Science isn’t a bunch of nerds with no aesthetic taste. Science is the source of all our power. Science connects us to our place in the Cosmos. Science brings us closer to God. It’s no wonder the forces of violence, materialism, and greed are so keen to keep us and our children away from it.

In case you haven’t heard, Burning Man completely mucked up their ticket sales this year. They have more demand than any server can handle, and there are so many people who want to come, that if you distribute the tickets randomly, there’s no way for the project camps to secure enough tickets to actually build the city everyone else is trying to come see.

Let’s solve this, shall we?

There are three problems that need to be solved:

To pull this off, you have to split the tickets into two allotments, the corpus allotment for project camps, and the spirit allotment for general attendees.

Project camps will send in applications as usual, but in addition to their plans, they will include the number of tickets they will purchase at the group rate.

Once the city is planned, contact those camps and sell them their requested number of tickets.

The spirit allotment is then distributed using the standard lottery system.

Important: do not mess us this split. Overestimate the corpus allotment or delay the spirit allotment to after city planning if necessary.

For the current situation, the only thing that really matters is solving problem 1, because without that, Burning Man as we know it is over.

What has to be done, then, is to try to move things back inline with this general plan.

I hope they get it sorted, or ol’ “Pirate” Mike won’t be flipping breakfast your way at Pancake Playhouse this year, and that would suck for everyone.

Like this idea? Want some advice of your own? Hire me!

Today, as I began carefully sifting through the emotional minefield of my inbox, I got this: 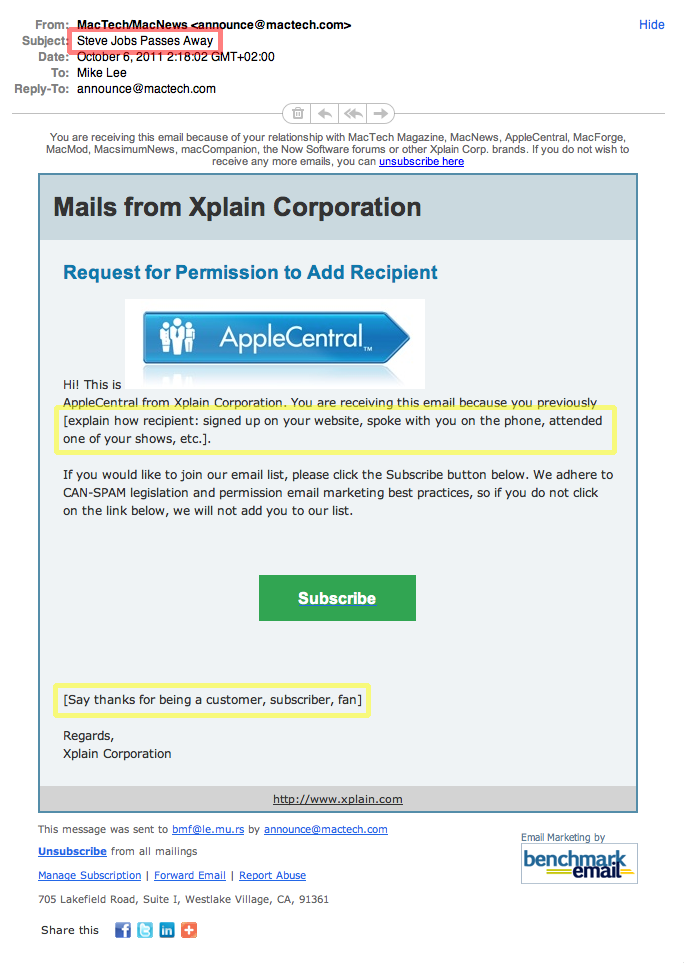 Clearly the person tasked with sending this email was so distraught over the news that they accidentally typed the thing foremost on their mind into the subject field and forgot to fill in the other fields before, overcome with grief, they hit send.

Today I received the inevitable follow-up to what was obviously someone’s goof. 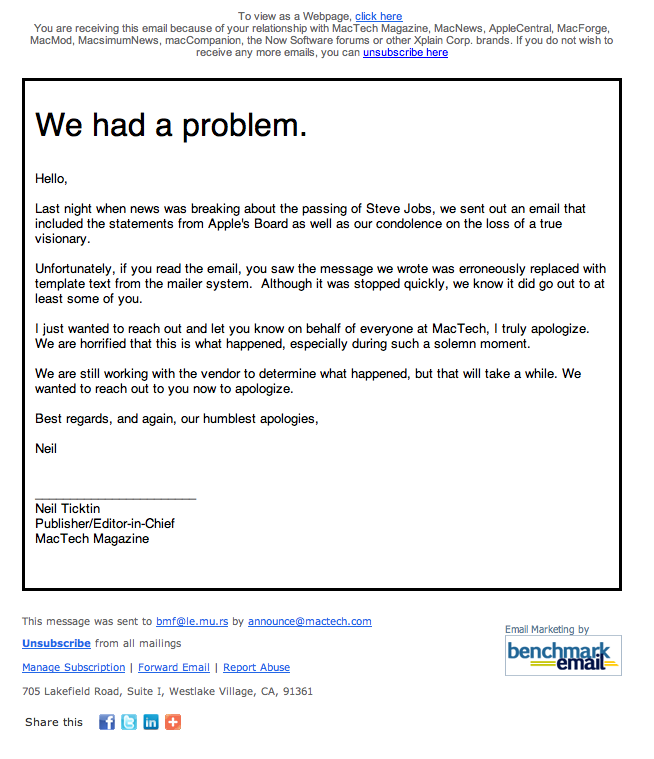 These guys also reached out to me personally to let me know how incredibly sick they were at their mistake. The good news is, it was just an honest-to-goodness error and not something more sinister. This is why we always assume positive intent.

Made by robots in California

This week’s winner of the “Who can be more like Apple?” award is HP, which has had some success with its HP Touchpad, because it looks enough like an iPad you can almost forgive it for not being an iPad. But let us make one thing abundantly clear:

With uncle* of the iPod Jon “Ruby” Rubinstein on the job, they’re obviously not trying to be Apple. Richard “It’s Richard” Kerris, formerly Apple’s Senior Director of Worldwide Developer Relations, even said so, which is how we know it’s true. The fact they ripped off Apple’s trademark slogan merely serves to drive that point home.

As I have pointed out before on this blog, the problem with following Apple is that the furthest you can go is up Apple’s ass. If you want to compete with Apple, you have to do your own thing, which might just enable you to out Apple Apple.

Instead what you get is Apple’s slogan with hippyish “Apple” replaced by the inhuman “HP,” which sounds like the name of a robot, or to the British, the name of a tangy sauce.

Back when HP had a soul, it was called Hewlett Packard, because it was started by two guys named Bill Hewlett and Dave Packard, classmates at Stanford, who started the business in their Palo Alto garage.

You know why its fans put up with Apple when they’re bad? Because they make quality products. But aside from that, it’s because when we look at Apple, we see that picture of Steve and Steve in the garage.

Where’s the picture of Bill and Dave in the garage? Why don’t you take that picture, simplify it a bit, make it look like a woodcutting, and laser engrave it on the back of your new toy. Remind people where you came from. Remind yourself where you came from. Then live up to that.

That, my friends, is how you compete with Apple.

* The actual father of the iPod being Tony Fadell.

While the in-app purchase API boycott and bugroast get rolling under the hashtag #unlodsys, the next big question is what, exactly, do we want from Apple?

The short answer is, we want the same thing Jules wanted from Marcellus Wallace during the Wolf scene in Pulp Fiction.

An open letter to our developers:

2. We want Apple to destroy Lodsys by any means necessary.

Nothing keeps copycats at bay like heads mounted on pikes.

3. We want Apple to make us glad we work on their platform.

Platform providers should treat patent trolls who prey on their developers the way America treats terrorists who prey on her citizens.

If I could offer Apple a bit of advice learned from the airline industry, you should have a patent attorney on the doorstep of every developer affected by Lodsys and other patent trolls. It would be a relatively cheap way to set yourself apart from the other providers, who would love to entice your developers.